The Home Extensions That Add The Most Value

With UK residents spending more time indoors through 2020 and 2021, many homeowners’ requirements have changed, as they look for properties with more living space.

However, now the Stamp Duty holiday has come to an end, homeowners might look towards building an extension to avoid moving fees while increasing the size of their home. But is an extension worth the cost, or is moving home the more affordable alternative?

Allerton Damp Proofing, experts in cellar conversions, property surveying, and damp proofing, have revealed the value that several extension types could add to properties in the largest towns and cities across the UK.

They compared the average house prices in each area with the predicted house extension cost, and the change in value from the increase in space.

Which house extensions add the most value?

The team have analysed the predicted increase in value that five extension types would add to a property. These are averages from the 62 largest towns and cities across the UK.

A basement extension can add the most value to your property overall. Compared to the other extensions, this did cost the most, however. If you have an unused basement in need of refurbishment, Allerton Damp Proofing offers basement conversions that can add value at a fraction of the price.

In densely populated UK areas, homeowners might not be able to build an above-ground extension. Basement extensions are a perfect opportunity to expand the size of a property in central city locations.

The areas where an extension will add the most value 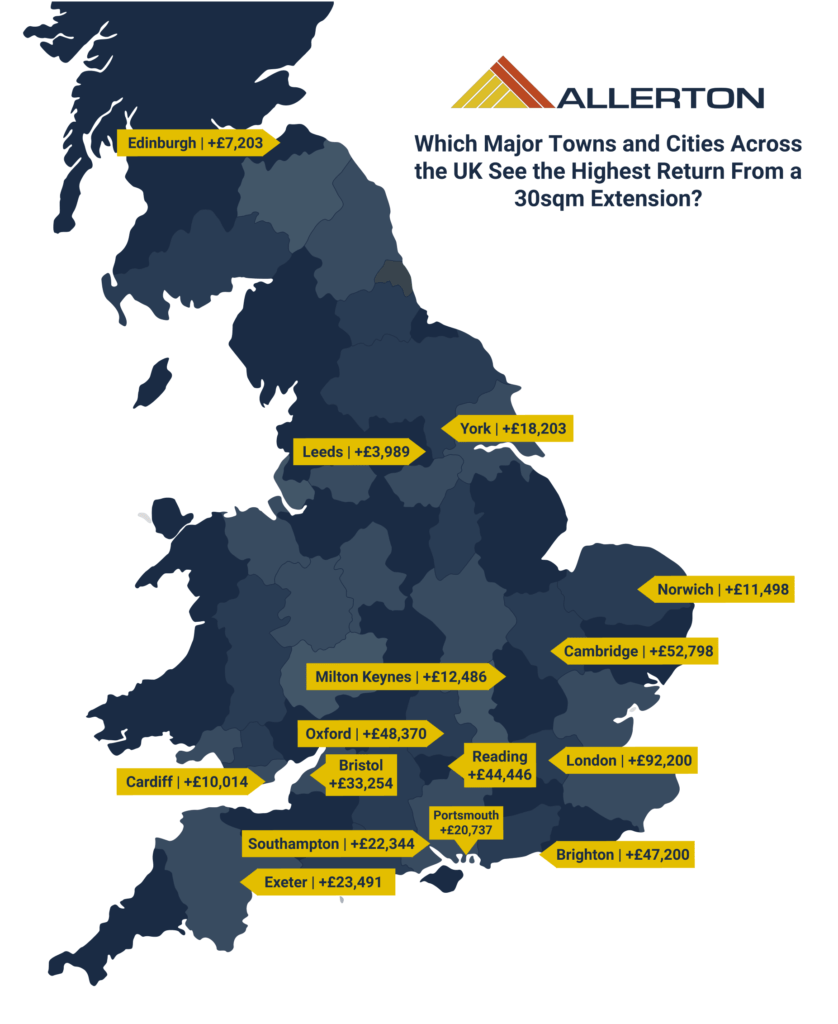 In certain areas of the country, demand for space is at an all-time high, increasing the value of every metre of land. Here is how much profit homeowners can make with a 30 square meter extension in 15 main UK cities and towns. 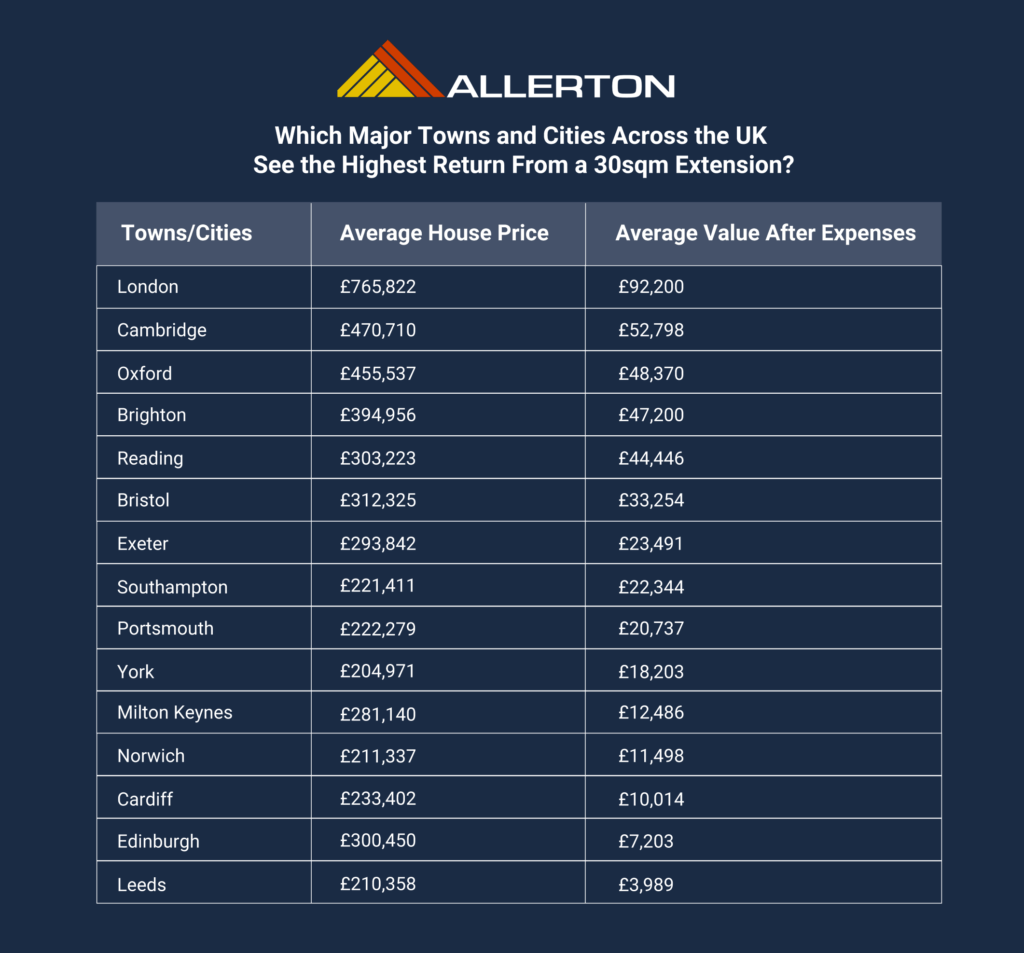 Overall, the average house price in London is around £765,822, 60% higher than second-place Cambridge.

However, if you’re living in London, an extension to your property will create the most profit of any UK area, returning an average of £92,200, after expenses.

Although London sits at the top – the property prices in this city are much higher than in other towns and cities in the UK.

On average, houses cost around £470,710 in the city of Cambridge. There’s a huge demand for housing in this desirable city which explains why the property prices are high. If you decide to build an extension on your Cambridge home, this could create an average of £52,798 in profit.

Property prices in Oxford aren’t too different to those in Cambridge, the average house price is around £455,537. Adding an extension to the average property in this city could make homeowners a profit of around £48,370 should they sell up.

While the cost of a home in Brighton is around £60,000 less than third place Oxford, homeowners here could add almost the same value to their property with an extension. An extension could generate £47,200 of profit for homeowners in this area.

London commuters could be looking for more space, as the research shows that the average value an extension adds (after expenses) is around £44,446 which is just £3,924 less than Oxford.

If you live in Reading, extending your property will set it apart from homes with less living space, making a real difference in desirability to the London commuter.

The most affordable areas to own a house, where an extension will add the most value 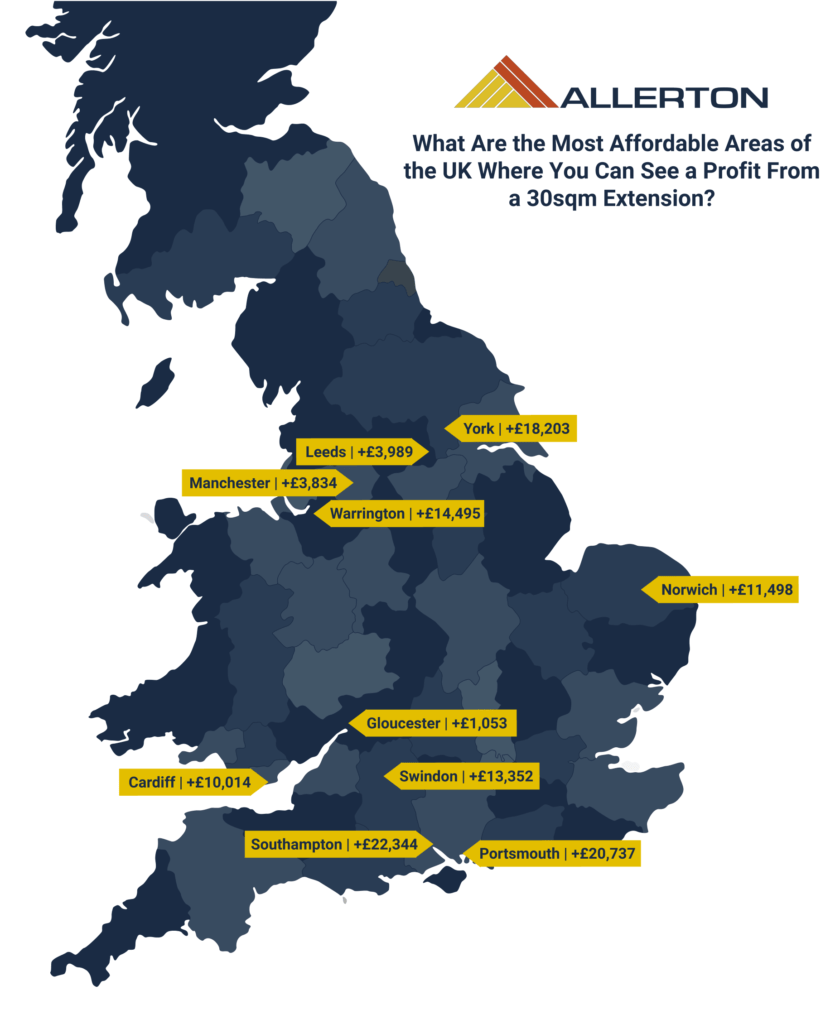 When the average value of a house is low, but demand for land and space is increasing, an extension can be a great option for adding more value to your house than in other areas. If you’re in a location with a single type of housing stock, adding an extra bedroom or more living space can set your home apart from your neighbours, and increase the desirability of your property. 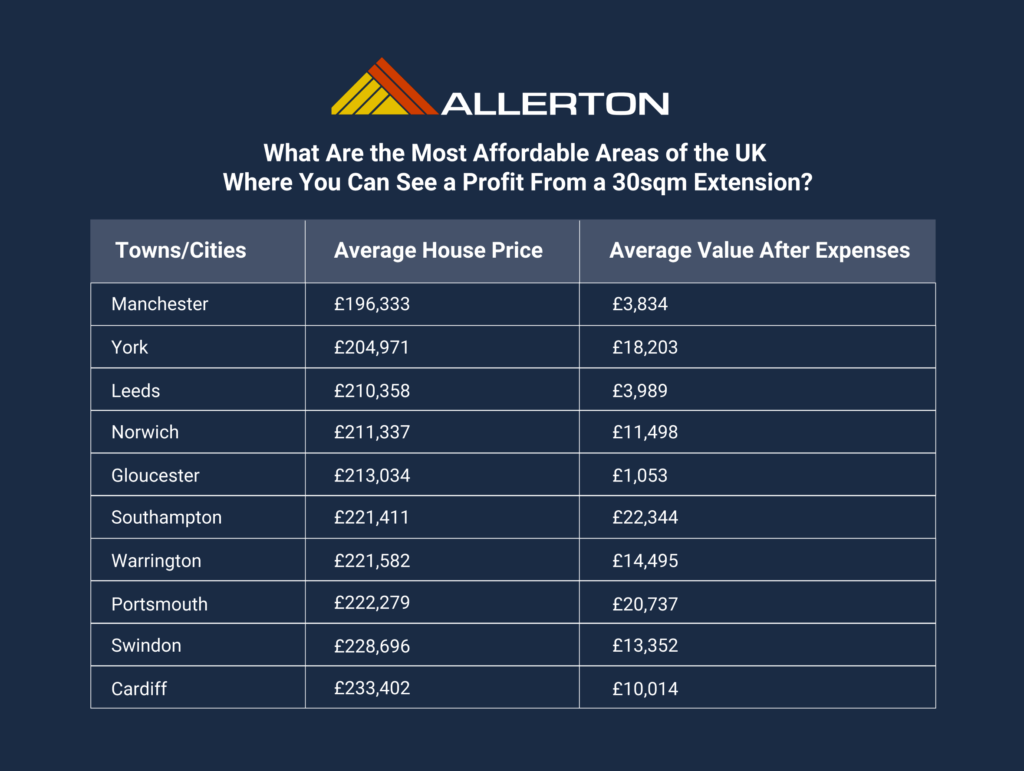 On average, a property in Leeds costs £210,358. While an extension won’t create as large a return as in York, £3,989 on top of your property value, after expenses, it’s certainly worth the investment.

Houses in Norwich are very similar to Leeds, averaging at around £211,337. If you decide to add an extension to your home in Norwich, you could be seeing around £11,498 after construction costs.

Adding an extension to your home in Gloucester will give homeowners an average profit of £1,053. While this is the lowest return of the top five, properties here cost an average of £213,034, so being able to turn a profit on an extension is still great for homeowners looking to expand.

Joe Trivett, Damp Expert at Allerton Damp Proofing, adds: “When homeowners start requiring more space, calculating the costs of moving to a larger home versus an extension can be challenging.

“While average property prices in York are comparatively lower than in London, Oxford, or Cambridge, the area is still one of the most sought after in Yorkshire, so buyers are willing to spend more to secure extra space here.

“Likewise, in different areas of the UK,  the amount of interest and profit an extension may generate changes massively.

“If you are extending with the aim of increasing your property’s value as much as possible, tailor that house extension cost to what potential buyers would want. In an area desired by young professionals consider adding a home office to the property.  Alternatively, if the area is family orientated, prioritise creating another bedroom.

“Keep in mind your house’s ceiling price, the maximum price that it may go for on the market. You can estimate this figure by looking at the recent sale prices of similar properties on your street.

“While this research indicates an average increase in value from extensions across UK towns and cities, the value of additional space can massively change within the same small area. Transport links and school catchment areas, for example, can change the value of a property to a commuter or family.

“An extension is a great opportunity to add space to your home, without starting over in a new property.

“The housing market has been highly competitive recently as people look to upsize, so opting for an extension instead of a move can save you lots of time house hunting, especially if you’re really happy with the location you currently live in.”

As members of the Property Care Association, all surveyors and technicians have the suitable qualifications and skills needed to take good care of your home. Allerton Damp Proofing is certified by the Contractors Health and Safety Assessment Scheme, Trustmark and Which? Trusted Trader, ensuring your damp and wood treatments are in safe hands.

Ready to get in touch?

Please note that, as a provider of essential services, we are still open for business, with some restrictions. As a new or existing customer, you can continue to call us to discuss new or existing projects.

Please note that we have had to restrict our work in occupied homes considerably, due to the risk that this might pose to our customers and workforce. However, our work in empty homes and properties continues largely as normal.

If you would like to speak to a member of our team about anything to do with our work during the COVID-19 crisis, please contact us, as normal, using any of the contact details on this site.