The Top TikTok Snags When Buying a New Build Property

The Top TikTok Snags When Buying a New Build Property
Posted by Wesley Blackburn LL.B (Hons) on 24/05/2022 in Uncategorized

In recent years, the property development industry has boomed due to a rapid increase in demand for housing, with an estimated 183,450 new houses built in the UK from June 2020 to June 2021.

With the government desperately trying to address the UK housing crisis, construction companies are under immense pressure to stick to strict targets. Poor or limited workmanship can often lead to corners being cut, which can, further down the line, result in bigger issues for homeowners.

It is extremely important to pay close attention to any warning signs when buying a new build property, no matter how small, as they could result in you paying out a costly repair bill in the future.

The Most Common Snags in Newbuild Properties 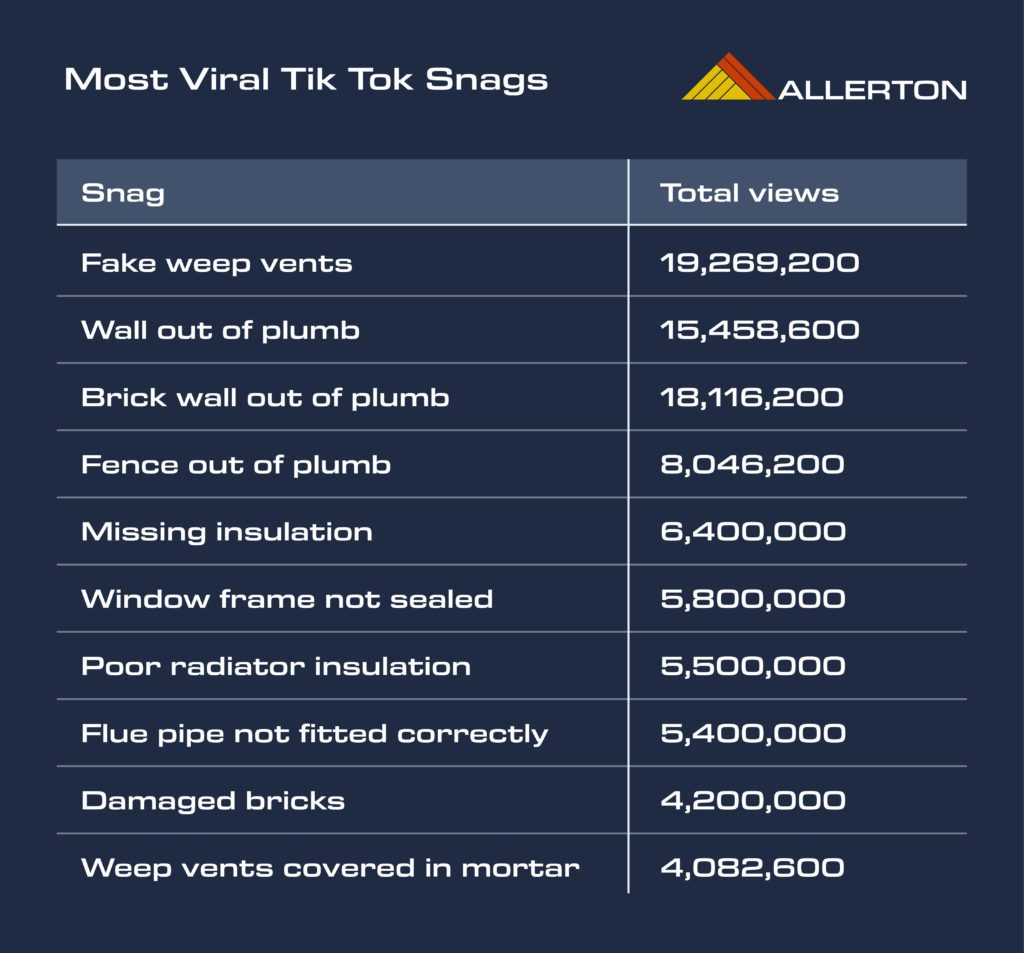 The team analysed 50 TikTok videos, from viral snagging inspectors New Home Quality Control, to reveal the top most common faults to watch out for in new build properties.

Fake weep vents were found to be the most common snag in new build properties.

Weep vents play a vital role in providing ventilation and draining any excess water that may enter the internal wall cavity. Fake weep vents are often a way to cut corners in construction, and if left undiscovered, can leave a property with the more costly and disruptive issue of dampness.

The brick walls of a new build property should be at a 90-degree angle to the ground on all sides, in order to be classed as ‘plumb’. An out-of-plumb wall can lead to the weight of the home being off centre, again, putting additional stress on the overall structure.

The second most common snag found in new build properties is an out-of-plumb wall.

The interior walls of a new build property should be positioned vertical on all sides, in order to be ‘plumb’. An out-of-plumb interior wall can put additional stress on the structure of a property.

The fourth most common snag found in new build properties is an out-of-plumb fence.

If the fence of a new build property is leaning to one side, or is off level, with challenging weather conditions and pressure overtime, this can result in the entire fence needing to be replaced.

The fifth most common snag is the window frame not being sealed properly.

Failure to properly seal a window frame can allow moisture to enter the window panes resulting in condensation and poor insulation, increasing the amount of energy needed to heat your home.

Sixth is insulation missing in the new build property. Insulation helps to regulate the temperature, keeping in heated or cooled air.

Without insulation, it can be extremely uncomfortable in your home. Missing insulation also increases energy bills, as more energy is needed to heat or cool the home.

The seventh most common snag found was poor radiator insulation.

Eighth is the flue pipe not being fitted correctly. This is extremely dangerous and one of the most important snags to look out for.

The flue pipe is designed to dispose of any harmful gases produced by your boiler. If the flue pipe is fitted incorrectly, these gases can find their way back into your home which can lead to exposure to carbon monoxide.

Damaged bricks is the ninth most common snag found in new build properties.

Cracks in external walls can be a sign of an underlying structural problem. Overtime, even minor cracks can lead to water ingress and damp, which can be costly to rectify.

Finally, the tenth most common snag is weep vents covered in mortar.

Weep vents should not be sealed with mortar as they are a necessary component in your home for ventilating the space and draining out any water.

Joe Trivett, Damp Expert at Allerton Damp Proofing, said: “When looking to purchase a new property, it is extremely important to complete a snagging inspection.

“Common snags can incur expensive repair costs further down the line, especially if they are reported after the warranty period. Even minor snags can have a major impact on the overall safety of a building.

“For example, fake weep vents are one of the most common snags found on a new build property. If excess water is not properly disposed of, this will enter the wall cavity and lead to dampness and mould, which can result in health issues such as respiratory problems.

“The best way to avoid a costly snag list is to note down the most common faults found in new builds and take this with you when looking around.

“To avoid costly repairs and other disruptive issues, ensure all of the tasks are completed to a high standard by choosing a reputable building contractor. If you spot any problems, make sure you report them well ahead of the end of your warranty period.”

Allerton Damp Proofing are certified by the Contractors Health and Safety Assessment Scheme, Trustmark and Which? Trusted Trader, ensuring your damp and wood treatments are in the safest of hands.

Wesley is the Director of Accounts and Legal at Allerton Damp Proofing, Yorkshire's Premier Provider of Damp Proofing and Timber Preservation Services. In joining the company, Wesley brings with him a wealth of experience in legal, regulatory and office procedures.

Ready to get in touch?

Please note that, as a provider of essential services, we are still open for business, with some restrictions. As a new or existing customer, you can continue to call us to discuss new or existing projects.

Please note that we have had to restrict our work in occupied homes considerably, due to the risk that this might pose to our customers and workforce. However, our work in empty homes and properties continues largely as normal.

If you would like to speak to a member of our team about anything to do with our work during the COVID-19 crisis, please contact us, as normal, using any of the contact details on this site.